As my youth groups know, I like to deconstruct advertising. We ask what is being sold to us—a ‘mere’ product or a particular lifestyle and ideology? What kind of myths and desires are being appealed to?

Diesel’s “Be Stupid” campaign caught my eye in San Francisco the other day. Here’s a sample: 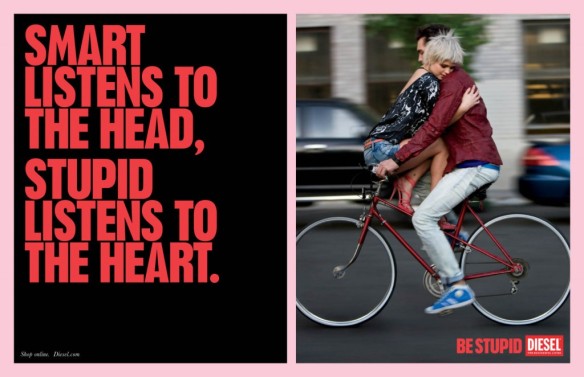 When I saw the words “Be Stupid” (with no accompanying photo) on the window of the Diesel store downtown, I thought the campaign was, well, dumb. “Be stupid? Our country has definitely succeeded in that area,” I thought.

So I went to the website to see how their advertising philosophy was fleshed out. Check it out here. Watch the video, so you can see what kind of idea of ‘stupid’ they have in mind: Creative, heartfelt, risk-taking, etc. Throughout the messy website, Diesel’s advertising campaigns are “fleshed out” quite literally. As is the case with most clothes marketed to young people, sexualized bodies (hyped up into a mythical ideal) has become a standard. Diesel goes so far as to create a campaign called “Sex Sells.” Obviously, they’re using models who go to the gym a bit more than I do.

In the end, I find that Diesel is not doing anything particularly novel with their campaigns. “Be Stupid” and “Sex Sells” are somewhat rote, boring, unoriginal in my mind. They rely on tired myths about youth culture: “We’re risk-taking and sex-crazed!” Their use of “Sex Sells” tries to appropriate a common criticism of advertising, but to want end? (In case you didn’t peruse the website, they put jeans in sex positions, but it appears as if the human bodies are invisible.) If there wasn’t so much standard-sexy flesh-photos in the “Sex sells” campaign and instead used ONLY the invisible-bodied jeans-having-sex, then I would consider it playful and original. (The subtitle of the campaign is, “unfortunately we sell jeans.”) Rather, Diesel is utilizing the standard Abercrombie and American Apparal sexy blah-blah.

What upsets me is how these myths of youth—“always risk-taking and sex-crazed”—are imposed upon youth BY ADULTS. These advertisers are not the age of their models or their targeted demographic. They are adults in an industry that imposes certain ideologies upon the adolescent and young adult experience. They say we SHOULD be taking risks and craving sex (at the expense of other desires, such as bodily health and meaningfully intimate relationships).

I advertise a different ideology and lifestyle. Don’t “be stupid” enough to think that intelligence is diametrically opposed to creativity. One thing the advertisers won’t ever tell you is that foolishness for Christ means to “be on your guard against all kinds of greed; for one’s life does not consist in the abundance of possessions.” (Luke 12:15)

As Paul writes to the Corinthian church: “We are fools for the sake of Christ, but you are wise in Christ… To the present hour we are hungry and thirsty, we are poorly clothed and beaten and homeless, and we grow weary from the work of our own hands. When reviled, we bless; when persecuted, we endure; when slandered, we speak kindly.”

And all the people said, “Amen.” 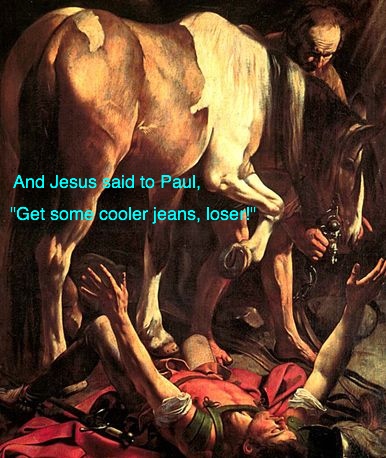 Aaaah, this is funny. And I totally agree with Elton. 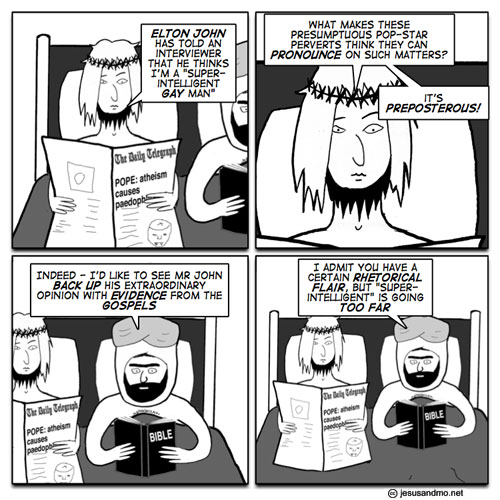 [Image removed]I hear the deep thud of the bass drum coming through the walls. I have buried my head in a cotton pillow. I am trying to fall asleep, but I am restless. The music rhythmically beats bump, bump, bump.

Tent cities going up around the country, more and more unfamiliar homeless faces on the street—someone has started to sleep by the sidewalk on my block. I have never seen a homeless man sleep so close to my apartment before.

In the morning I meet with religious leaders in the East Bay. We have formed an Interfaith Immigration Coalition, with an acronym for a name and everything. A suited man who works for the Catholic diocese emails me a survey of 1000 Catholic adults. I am most appalled by the answer to a particular question: Would you strongly support, somewhat support, somewhat oppose, or strongly oppose U.S. government assistance and trade policies that would create jobs abroad in order to prevent immigrants from coming here illegally to seek employment? Only 37% gave support. 57% opposed such policies. Fifty-seven percent! I can hardly believe it. Do they not know why people migrate?

Bump, bump, bump—music from below, heard through the walls, getting into my head.

“In the days when the judges ruled, there was a famine in the land, and a certain man of Bethlehem in Judah went to live in the country of Moab, he and his wife and two sons…” Thus begins the book of Ruth, a story of migration: A father moves for economic reasons, looking for food, looking for work, looking for a new and bigger family, to continue. But these days it is worse, because I know there is no naturally caused famine in the two-thirds world. The great United States, inheriting its grand imperialism from Europe conquistadors, has exploited the land and labor in Latin America. “Free Trade” comes with the freedom to oppress. We cause the famine. We live in a land of plenty, because we steal from the masses.

Music, melody, harmony, discord, rhythm, bump, bump, bump, through the wall, over the fence, across the border, bump, bump, a beating heart, coming to me in the night 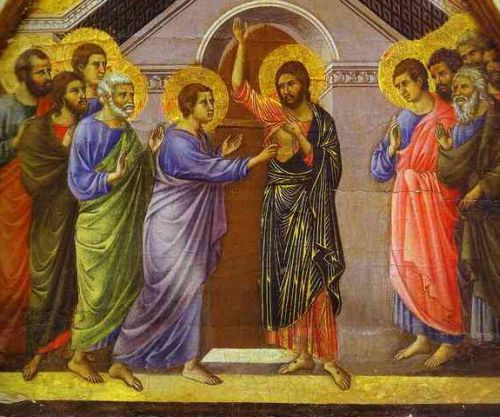 The scene where Thomas asks, "Are you sure this is sanitary?"

For those of us who doubt, we have it hard. We want to believe, but we also enjoy being skeptical and explorative. We don’t want to answers to come quickly, because we like discovering the beauty of the cracks and crevices.

James says that the doubter is “double-minded and unstable in every way,” “like a wave of the sea, driven and tossed by the wind.”  Well, that describes me pretty well, so what do I do?

Enter the creative/literary beauty of John’s Gospel, a book that is boring if interpreted literally but wonderful if experienced as metaphor.

It’s necessary that we leave our privilege and safety to feel the wounds of those crucified by an unjust world. For me, I feel called to put my finger in the mark of the nails, because when Christ appears in the flesh, I am humbled and amazed. I see God anew.

In this Easter season, I hope that you ask to see the wounded body of Jesus, for if you do, whether it be in oppressed workers, or in immigrants threatened with deportation, or in marginalized glbtq folk, you will be struck by the presence of a living God who dwells in the struggling lives of the disinherited.

You will be given a resurrection in which to believe. 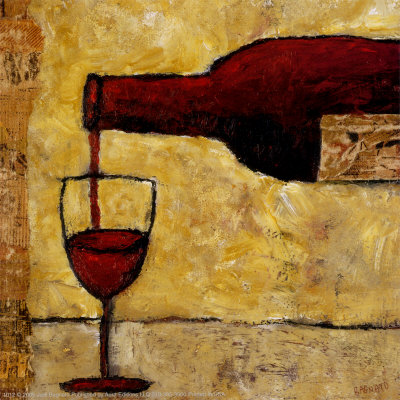 Jesus recommended this on a regular basis. It's good for your heart. (Painting by Judi Bagnato)

Who has woe? Who has sorrow?
Who has strife? Who has complaining?Who has wounds without cause?
Who has redness of eyes? Those who linger late over wine,
those who keep trying mixed wines. Do not look at wine when it is red,
when it sparkles in the cup
and goes down smoothly. At the last it bites like a serpent,
and stings like an adder. Your eyes will see strange things,
and your mind utter perverse things. You will be like one who lies down in the midst of the sea,
like one who lies on the top of a mast.‘They struck me’, you will say, ‘but I was not hurt;
they beat me, but I did not feel it.When shall I awake?
I will seek another drink.’

I gave up alcohol for Lent. I think it was all those John Wesley sermons I read…