Dear friends, first, READ THIS ARTICLE above. Yes, it’s biased. So is the news on the television. Nothing on CNN will tell you why Haiti is poor, and this infuriates me. You will have to do your own research if you’re going to learn anything. Take your television out to the driveway, and smash it. If you ACTUALLY care about the Haitian people, rather than just enjoying images of their destruction on television, then you’ll learn about their history, and the United States’ complicity in their oppression and exploitation. The news media will do nothing but continue this exploitation by using graphic images to gain viewers and ad revenue. [I want to refrain from such pornographic use of images of poverty. The photograph below is of Haitians protesting against the cost of living, on April 7, 2008 in Port-au-Prince.] 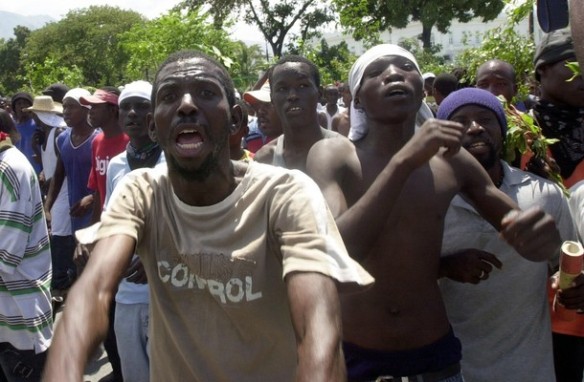 Think I’m being negative or pessimistic? Wake up. We live in a capitalist-consumer society, where wealth and profit is worshiped. The news media (and the corporations that own it) have no interest in teaching you ANYTHING that would make you live differently, worship something else besides consumerism, or stop worshiping yourself. The truth is this: We do not and cannot live innocent lives, without responsibility to the poor, exploited, and marginalized. To attempt an attitude of removed neutrality or faux sympathy, you are complicit in the oppression of the world’s socially impoverished people.

2 thoughts on “WHY IS HAITI POOR? Find REAL answers.”